Galeria Adelmo is proud to present a retrospective exhibition “Thought my eyes” by Miami-based visual artist Rafa Montilla. The exhibition will open with an artists reception on Friday, November 24 from 7:00 p.m. at 10:00 p.m. and will be open until December 28. 2017

Rafael Montilla, Venezuelan artist with a long career, after having lived some years in India, UK and Trinidad, decided to settle in Miami, a city where he has been living for 17 years.

Rafael Montilla is an experienced photographer who remains in love with the city of Miami and, above all, with its tropical landscape and vibrant architecture.

Agusto 19th 2016 proclaimed “Rafael Montilla’s Day”, a distinction awarded by the city of Miami in virtue of his successful career and love for that city, which he reinterprets with his visual illusions and volumetrics.

“He has been experimenting in the last months with the fractionation of the photographic image, establishing games and visual illusions when printing them on virtual volumes.” Montilla digitally works the forms in order to accentuate the idea of the depth and, at the same time, grant new edges to the perception of the image, the landscape is now dynamic, voluble, full of tensions, the materials with which they experiment contribute to accentuate this experience of contemporary photography”

Photography and sculpture, manifestations of the visual arts, through which Rafael Montilla expresses himself, are circumscribed in these principles of correspondence, undoubtedly that this artist shares this idea of coincidence between art and poetry, which we notice when he says: “My photos are poems in colors and lines.” “I capture the art of nature and reproduce it as poems” José Gregorio Noroño Art Critic

“Rafael Montilla is an artist of the image that gets lots of sights. Just take a look at his photo sculpture to see how his current cubism transforms the visual arts as the Cubists did with the plastic arts at the beginning of the 20th century. He covers his eyes with his hands to carve games and illusions in and out of cubes of multiple perspectives in emerging North American art” Carlos Sánchez Fuenmayor Curator and Art Critic.

“The images of photographer Rafael Montilla produce a seductive effect to the look. That seduction with the added hook of the beloved city induces to explore photography’s analogical essence, and encourages finding the message that appears on the tip of the iceberg of the image that floats on the photographic surface of what it means to mean” Víctor Fuenmayor Art Critic.

Montilla has exhibited in galleries in Miami, Weston, Toronto, Madrid and other alternative spaces of art in this city. He is one of the most active urban artists in Miami. He has been invited to place his installation of “Kubes in action” during the week of Art Basel in Miami 2017, in Spectrum Miami Tent. His work has been featured in Miami Diario newspaper, Ciudad Weston newspaper and Doral Times newspaper, Nagarimagazine.com, MujerLatinaUSA.com, Crear Ambiente Magazine – Quito, Ecuador and La Nota Latina magazine.

Galeria Adelmo located in the Little Havana district opened in April of 2010. Its primary goal is to represent and promote the artworks of local established or emerging artists from South Florida and other areas of the country and also from the rest of the Americas. 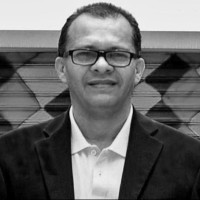